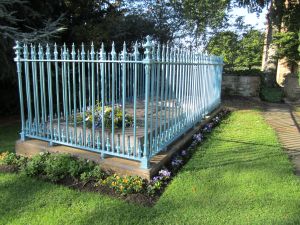 A Saxon church may have stood on this site, but the first documented evidence puts the date of foundation as about 1180. Norton has parish registers dating back to 1559, which are valuable in recording burials.

It should be noted that many grave stones have been moved to the perimeter walls or simply 'lost' over hundreds of years. A major overhaul of the churchyard was done in 1959/60, when many unsafe table top tombs were removed.

The preaching cross originally stood on the west side of the path, but it was moved when Sir Francis Chantrey selected that spot as his final resting place in 1841. It is believed that John Wesley may have preached from the cross on a visit to Woodseats.

The Garden of Rest behind the tower was created in 1956 and the lych gate area was redesigned in 1962. Lych is an old-English word for corpse and a lych gate is where the bearers would wait for the priest to precede them into church. The churchyard was closed for burials in May 1869, when the confusingly named Norton Cemetery was opened on Derbyshire Lane.

A survey of inscriptions was made between 1988 and 1994. Since then some inscriptions have been lost under ivy and brambles, but it is still possible to read many stones. The oldest stone is located in the grass between the two benches, but is difficult to read. Dated 1644, it is dedicated to Elizabeth, wife of Richard Cooke.

Sir Francis Chantrey, the famous sculptor has a large granite slab surrounded by railings. Chantrey himself wanted a simple stone, in great contrast to the elaborate sculptures he carved. Born at Jordanthorpe, he merited a burial place in Westminster Abbey or St. Paul's Cathedral but chose to return to his birthplace. (There is now a restored painting of the burial on show at Weston Park Museum.)

The Celtic cross in the NE corner is to Rev Walker Hall and his wife, Annie, who pre-deceased him. The spot was chosen as Mrs Hall had lived at Norton Grange before her short marriage to the Vicar and the cross is in sight of both that house and the former vicarage.

Many stones reflect the daily life of old Norton, recording scythesmiths, schoolmasters, a soldier, a doctor and the many farm labourers. The landed gentry are also found here. The Jenkins, Linacre and Linley families are all represented. The high infant mortality rate is also recorded and there are many moving verses still to be seen, some particularly gloomy: Dear Reader "Tis a serious thing to die!" Charles Glover aged 16 was murdered - "untimely slain" and his stone can still be found on the south wall.

As in any churchyard, there are unusual Christian names recorded: Amaziah, Wastell, Nulty and Annis. One or two stones have no names at all. It is assumed that the Parker family vault is near to the south side of the church. William Swift, the Sheffield genealogist, described the Parker tomb as having railings and yew trees at two corners. There is visible evidence that railings had surrounded the stone and yew trees had been cut down.

No detailed species list has been made. The proximity of Graves Park and the uniformity of stone tend to limit diversity. A wild area was created a few years ago but without being managed has not been very successful. Encroachment of ivy and brambles gives concern for inscriptions on the stones round the perimeter.

Many trees need management, but some have preservation orders on them. There is a large holm oak and Rev H Pearson planted 2 Jerusalem holly bushes: one on the north side of the church and the other on the south side. A large cedar tree, brought from the Holy Land as a sapling (also by Rev. Pearson), was brought down in the gale of 1962. The yew trees lining the main path had to be felled for safety reasons, just a few years ago.

Many bulbs have been planted by cubs and beavers, brownies and rainbows.