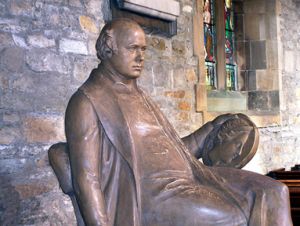 On the Southern fringe of Sheffield, just off the busy A61, lies the suburb of Norton, an area known locally as "Chantreyland." Formerly part of the Scarsdale Hundred, Norton comprised the hamlets of Jordanthorpe, Maugerhay and Hemsworth/Backmoor, and was situated at the northernmost boundary of Derbyshire. Although swallowed up by Sheffield in 1934, some of the village atmosphere has survived, despite the ever increasing encroachment of a modern city's sprawl.

It was here in the village of Norton that Francis Chantrey was born, in 1781. He was to become one of England's foremost sculptors.

His father was a tenant farmer at Jordanthorpe and the cottage where Francis was born is still in use as a private house. It bears a plaque commemorating Chantrey. He was baptised at St. James' Church and, as a boy, Francis was educated at Norton Free School: which was endowed by Leonard Gill, one of the local gentry, in 1654. Francis's father made the desks for the school but, despite this, the young Chantrey's attendance was irregular! The original school building no longer remains but the present day school retains a link to its most distinguished pupil in the school logo.

The village, though mainly tenant farms in the 1700's, had several fine residences - Norton Hall (then the home of the Offley /Shore family), The Oakes (the home of the Bagshawes from 1721 to 1983, - now of Wormhill Hall), Norton House, Norton Grange and Jordanthorpe Hall, the latter associated with the Linley family. Each of these houses and families has a fascinating history of its own.

By taking a stroll round present day Norton many of these houses can still be seen, though in many cases they have succumbed to more modern usage. Fortunately most are located within a conservation area, so alterations are controlled.

It was through some of the local gentry of the time, who became the benefactors of Chantrey, that he was able to rise to fame and fortune.

Francis began drawing as a boy, using the stone flags on the kitchen floor. He also moulded clay and his love of sculpture is believed to have been inspired by the marble tomb to the Blythe family, which is still to be found in St. James' Church. He is supposed to have embellished his mother's pie crusts with pastry pigs and he would whittle sticks as he worked as a milk boy, walking the 5 miles to Sheffield with a donkey, carrying butter, milk and eggs.

After the death of his father when Francis was 12, he was apprenticed to a grocer in Sheffield. This was not to Francis' liking and he would gaze in the window of Robert Ramsey's shop in the High St. at the prints and plaster models.

Eventually, after much pleading with his mother, Francis was apprenticed to Mr. Ramsey for 7 years.

Chantrey's first ambition was to become an artist, so he decided to set up on his own in 1802. The "Sheffield Iris." (the local newspaper of the time), carried his advert seeking patronage.

A plaque in Paradise Square, just behind Sheffield Cathedral, marks the house where the great sculptor's work began in earnest.

He painted portraits of many local Sheffielders: then went to London to study at the Royal Academy. He worked for a woodcarver for 5 shillings (25p) a week to make ends meet. He kept in touch with Sheffield and, returning in 1804, advertised again in the "Iris", this time as a sculptor.

His first commission was for a marble bust of James Wilkinson, the vicar of Sheffield. Other prestigious work followed which included a large bust of Nelson for Trinity House.

After marriage to his cousin in 1809, the couple settled in Pimlico. From that time on, his career moved forward at a rapid pace. He modelled a statue of George III (destroyed in WW2) and following this, commissions poured in. His brilliant career was established.

He travelled to the continent, where he met Canova, whose work he felt depended too much on ornamentation for Chantrey's own personal taste.

His list of honours is impressive: Royal Academician in 1818; honorary degrees from Cambridge and Oxford; he became an FRS and finally was knighted in 1835. A list of his works shows him to be one of the most eminent people of his time.

Spurning a place in Westminster Abbey, Chantrey chose to be buried in the churchyard of St. James' in his native village of Norton, in a spot he had selected himself. St. James' Church is tucked in a quiet corner of Norton, still witnessing to the glory of God as it has done since 1180 when it was founded by the monks of Beauchief Abbey.

Some years before his death, Chantrey watched a grave digger at work at St. Martin in the Fields, throwing human bones into a pile. Chantrey was dismayed to learn that the bones would later be thrown into the Thames and he resolved that this would never be his fate.

After his death in London in 1841, Chantrey's final journey took several days: the last stage from Chesterfield to Norton watched by many people on the route. His funeral was attended by many eminent Sheffielders with local villagers acting as bearers.

His tomb appears very stark and plain as a memorial to such a great sculptor, but it reflects Chantrey's dislike of ornamentation. It is a huge slab of polished granite, deeply incised with the lettering - a simple but moving memorial to a greatly talented local son.

After his death the Chantrey Bequest was set up. he greater part of his fortune, after the death of Lady Chantrey, was left to the RA to purchase works - either paintings or sculptures - by artists residing in Britain whilst executing the work. The first purchases of what is now an extensive collection were made in 1877 and housed in the Tate Gallery.

Also in his will Sir Francis did not forget his humble origins. He left £50 annually to the Norton schoolmaster for the education of 10 poor boys of the parish and £10 per annum to 5 poor men and women.

In the quiet corner of Norton which is his last resting place, Chantrey is also commemorated by an obelisk: the work of his friend Phillip Hardwick RA. Erected in 1854, the obelisk is 22 feet high and hewn from cheeswring granite from Cornwall. It was brought by sea to Hull and then overland to Norton.

Works by Chantrey may be found all over the country: locally, in Derby Cathedral, Ilam Hall, Sheffield Cathedral and the Cutlers' Hall. Further afield, his work can be seen in many places, including the British Museum, Buckingham Palace, Durham Cathedral, Eton College, Lichfield Cathedral, Oxford and Cambridge Colleges, Westminster Abbey and Windsor Castle.