Choral music has always been a strong feature of St James' Church.

The church has a traditional, robed Anglican choir made up of boys, girls and adults.

The choir provides music for a sung Eucharist every Sunday with the exception of the 2nd Sunday in the month when there is a Family Service. A traditional Evensong is sung at 6.15 pm on the 1st Sunday each month. A motet or anthem, drawn from the choir's extensive repertoire, is normally performed at each sung service. From time to time, the choir performs a full Choral Evensong in the cathedral tradition to special settings of the Canticles and Responses, Stanford in B Flat being a particular favourite.

Organist and Director Of Music 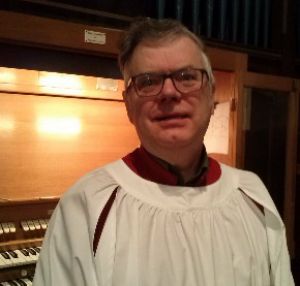 Mr Paul Coldicott is our Organist and Musical Director. Paul succeeded Peter Hackett, who had held the position since 1973. Paul is a former music pupil of Peter's at High Storrs School and so it seems a very appropriate way of passing on the musical baton!

Born in St Ives, Cambridgeshire and growing up in Norton Lees and Meersbrook, Paul has a musical background of singing in local church choirs and also for many years with the Sheffield Philharmonic Chorus.

Eventually he became Choir Master at St Paul's Norton Lees, until pressure of work, family and an Open University degree meant that he reluctantly stood down.

Paul's love and interest in music of all kinds in more recent years has found him as a deputising organist all over Sheffield and being the Musical Director for local groups (Ellesmere Operatic Society and Norton Players amongst them).

So it was with some fortuitous timing and very much to our benefit that Paul decided that the time was right to take up another permanent position, where he could become fully involved and take music at St James to the next level.