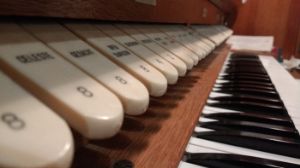 The church has a fine organ which was originally built in 1878 by the well known Sheffield firm of organ builders, Brindley and Foster. The year 1882 saw the complete renovation of the church with the installation of the current choir and pews, and the organ was moved to its current location. In 1948 work was carried out by T.C. Wilcock of Albert Road, Sheffield; this was most probably the installation of electric blowing.

In 1973 major work was carried out by Percy Daniel of Clevedon, the organ being expanded and extended and the console being replaced by one with new manuals and tab-type stops. In addition new stops were added to all divisions to improve the organ tonally.

While the key and stop action are both electric, slider chests are used for much of the organ though the ranks added at the time of the 1973 rebuild are on direct electric action.

An unusual feature of the organ is that there are two swell boxes each with its own balanced swell pedal, one for the flues and a separate box for the reeds. The organ has a combination action giving 5 presets to each manual, which are duplicated with toe studs. A special coupler ensures that stops are drawn on the Pedal division automatically, matching the selections on the Swell and Great. The combinations can be easily changed by means of a matrix of miniature switches. Each has three positions, so that for each piston the controlled stop in the division can be set to come on, go off, or not change.

The organ is registered with the National Pipe Organ Register, NPOR N01066.

The organ is the subject of an ongoing programme of repairs and restoration, ensuring that its sound will be enjoyed by congregations and visitors for many years to come. 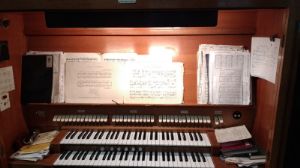 During 2017 and 2018, the pipework was removed from the organ and completely renovated by the Wakefield-based organ builder Andy Carter. This extensive work involved cleaning, fashioning new tuning sleeves, and replacing pipes with new where necessary. The was done a division at a time, thus the organ would always be playable for services. The display pipes, to the front (chancel) and to the side (north chapel) of the organ, some of which are part of the Great Diapason rank, were also re-painted in the original blue at this time.

The next phase of the work, commencing in July 2021, will be to entirely replace the ageing combination of electro-pneumatic and direct electric action with a new action which will be all direct electric and will feature the latest solid-state note switching system. This will entail opening up the wind chests, which has not been done since 1973.